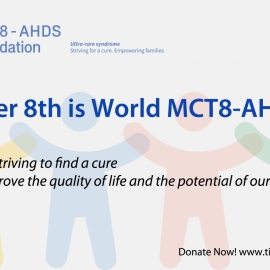 World MCT8-AHDS Day
Raising Awareness
This day is intended to raise awareness and let others know we exist.

On October 8th 2018, the first World MCT8-AHDS Day was held. This event was initiated by the MCT8-AHDS Foundation, the first world-wide patient led organization, in order to raise awareness for the disease.

The main purpose of the World MCT8-AHDS Day is to raise awareness. To let people know we exist, that our challenges are real and sometimes severe; to send a message of urgency as there is no cure or treatment for MCT8 deficiency and last but not least, to have a voice. On the longer run however our goal is to change perception and behavior. People acknowledging the existence and severity of this syndrome is desirable but people wanting to get involved and help, people changing their perception and behavior towards our children, that is better. And that is what our final goal is.

There was a lot of debate regarding the date in which to celebrate World MCT8-AHDS Day. But it was agreed that 2004 was a turning point in MCT8-AHDS research. In January and October 2004, the Laboratory of Refetoff (1) and Visser TJ (2) published, independently, papers connecting the Allan-Herndon-Dudley phenotype with mutations of the SLC16A2 gene, also known as MCT8 (Monocarboxylate Transporter 8. Finally, the day was given by the transporter itself, the MCT8, therefore the 8th of the month. Choosing the month of October is also a way of showing respect and gratitude to the research and memory of Prof. Dr. Theo Visser.

The World MCT8-AHDS Day represents our birthday as a community with all the hopes and expectations that birthday brings. It’s the day in which we forget a bit about our medically complex lives and we gaze towards the future, a day in which we celebrate our children and the bond we have as a MCT8-AHDS worldwide family. It is a celebration of joy and hope but it is also a day of recognition of the efforts, the struggle and challenges that our community faces.